Golf in the Land of Enchantment

When people think of New Mexico they often have visions of sprawling deserts, high flying hot air balloons, and tasty food that incorporates green chilies at every opportunity. While all those things are true, the thing you absolutely don't want to miss out in a trip to the Land of Enchantment is the golf.

Albuquerque is the heart of New Mexico and the epicenter of golf in the union's 47th state. While many of the city's cultural roots are tied to the famous Route 66 Highway, its deepest roots to golf are associated with the William H. Tucker Intercollegiate tournament hosted by the University of New Mexico. Dating back to 1955, the 3rd longest running NCAA Division 1 tournament was originally hosted at UNM's North course before moving in 1967 to UNM's Championship course once Robert 'Red' Lawrence completed the design. In fact, Tiger Woods first collegiate tournament as a freshman at Stanford was the Tucker where in 1994 he went 68-72-68 to win the tournament.

The Championship course, located just two miles from ABQ airport, features rolling terrain, views of downtown Albuquerque, and one of the best tests in the state. Playing 7562 yards from the back "Lobo" tees, college golfers and everyday patrons alike will have an opportunity to put their game to the test as this historic layout.

You get an impressive experience at the course right off the bat as Head Professional Adam Roybal relates, "My personal favorite hole is #1, a par 5. The view over downtown Albuquerque on your second or third shot is one you can only find at the UNM Championship Golf Course. Beautiful!" 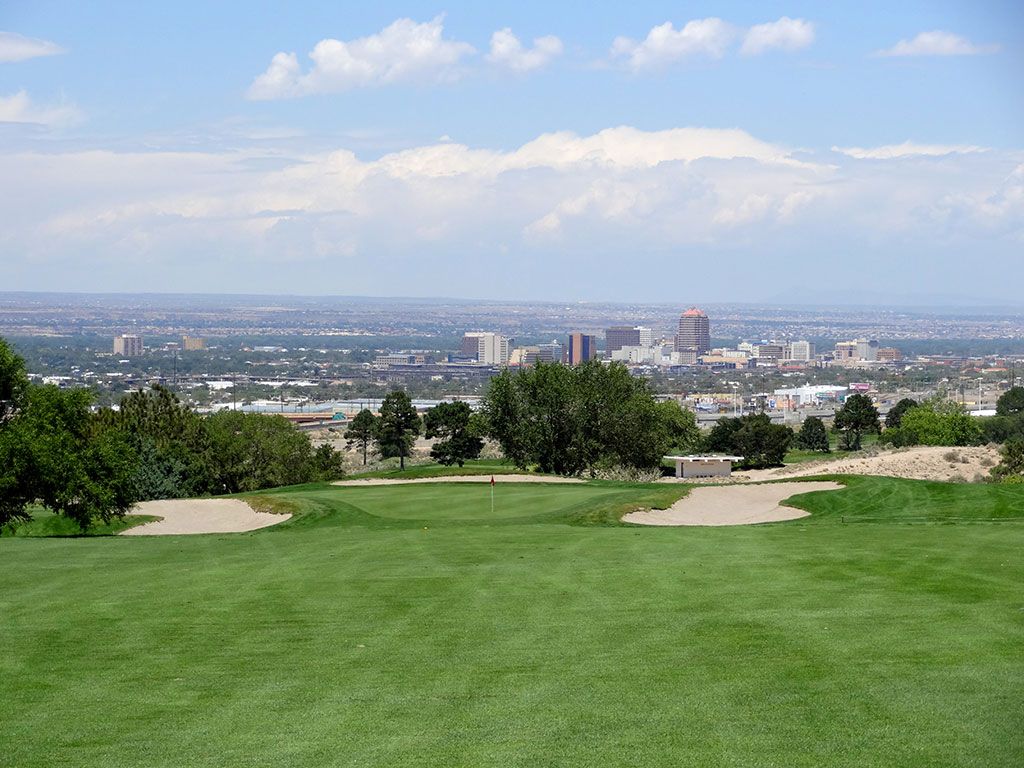 1st Hole at The University of New Mexico Championship Course

While the 1st hole may yield some birdies, you could sit all day at the signature 8th hole and not see a score under par recorded. Roybal shares, "Hole #8, a par 3, is our signature hole at the UNM Championship Golf Course. This par 3 can play from a mere 139 yards to a monstrous 280 yards. This hole is one of the most difficult, if not the most difficult, par 3 in the state of New Mexico."

The walk-friendly course features peak rates of $60 on the weekend for out-of-state visitors and a mere $29 to tee it up after 2:00. With some of the best conditioning in the state, six different tee boxes, and its convenient access to the airport and city center of Albuquerque, a visit to UNM's Championship Course is a no-brainer when in the area. 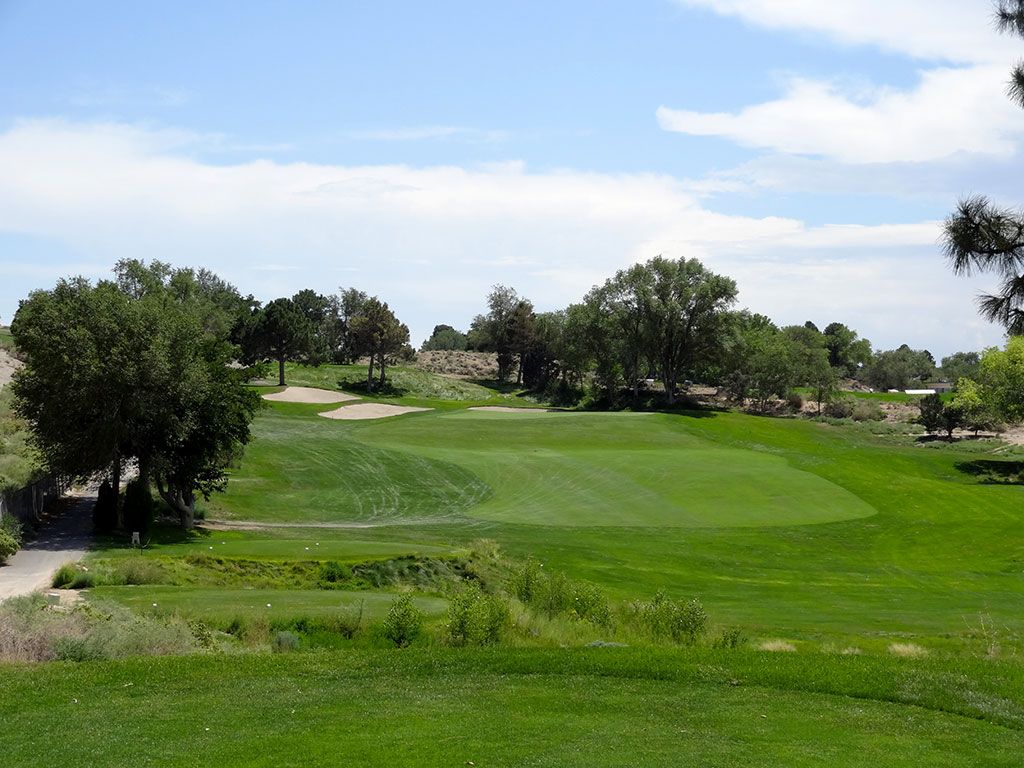 8th Hole at The University of New Mexico Championship Course

While UNM put the Land of Enchantment on the golfing map, it is the recent additions to this southwest location that has brought national attention to the area. Located 30 minutes northeast of Albuquerque, the area's finest course was built in the hills of Sandia Park in 2000. Five years later, Paa-Ko Ridge added a third nine to sport one of the finest 27 hole facilities I've ever stepped foot on. 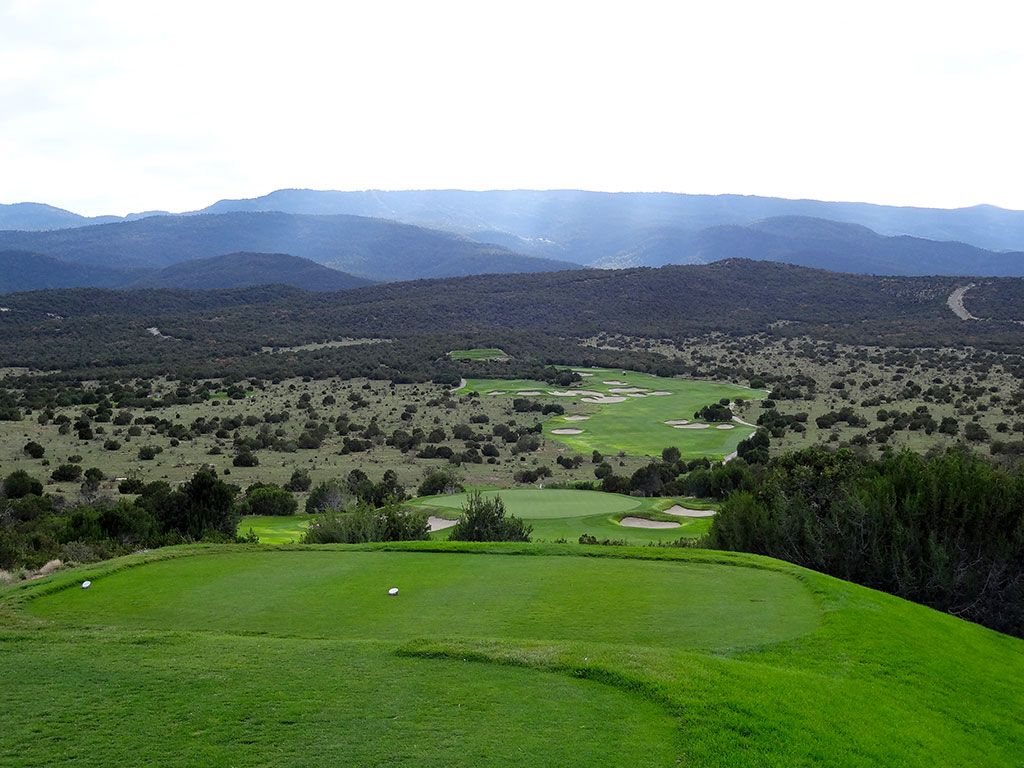 I often chuckle when courses claim, "We don't have one signature course at our facility; we have 18." But when it comes to Paa-Ko Ridge, there is actually some merit to the statement. On the opening hole I could tell it was going to be a good round. After the 2nd hole, I was surprised the course was ramping up so fast. Midway through the front nine Paa-Ko Ridge was flying up my personal rankings and standing as one of the finest public tracks in the West.

While the 8th and 14th holes, two par threes tipping out over 265 yards, can be identified as the signature holes at Paa-Ko Ridge, I guarantee you will never forget the 183 yard 4th hole. Named Dye-abolical, this beautiful par three is framed by a brush on the right, bunkers on the left, and stunning views of tree covered mountains in the back. Playing over a ball grubbing ravine, players are faced with a 100 yard deep green that features 13 feet in elevation change from front to back. That is not a typo; a 100 YARD deep green. Never has my laser range finder been more important to implement then when I teed off on this impressive one-shotter. 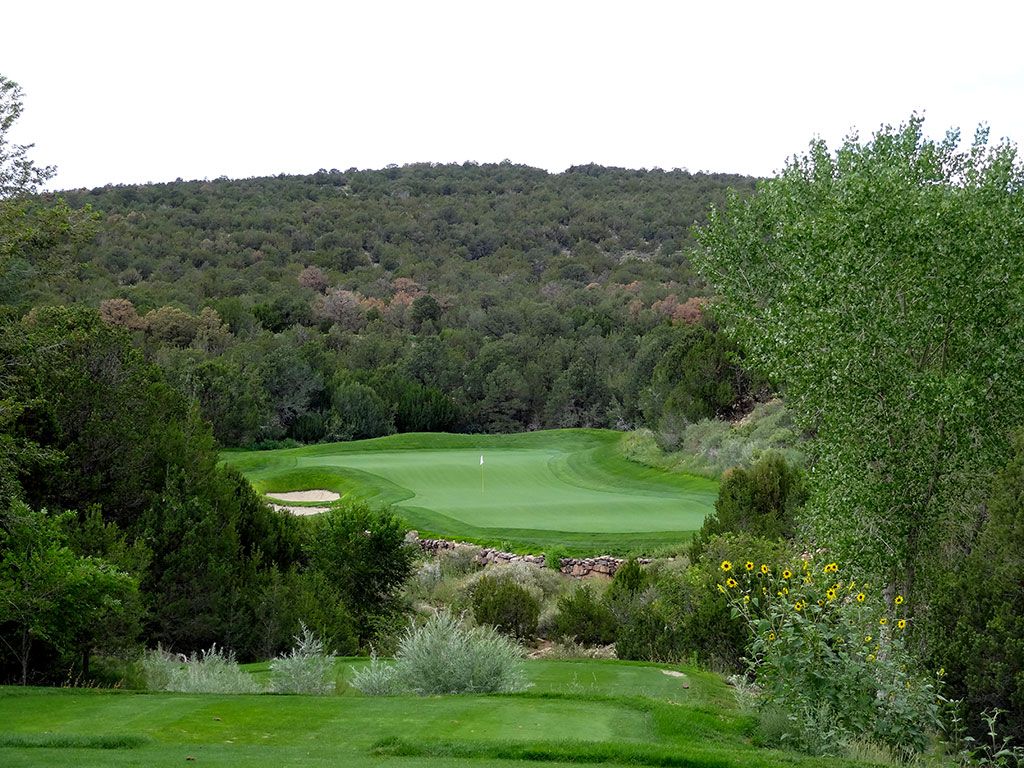 With stunning views and terrain throughout the course, Paa-Ko Ridge is simply must-play golf. If your driver goes wayward then be prepared to lose a few balls, but throughout the round you will enjoy some of the finest conditioning, views, and golf hole designs in the entire southwest. Green fees peak at $114 with twilight rates dipping under $50 during portions of the season. 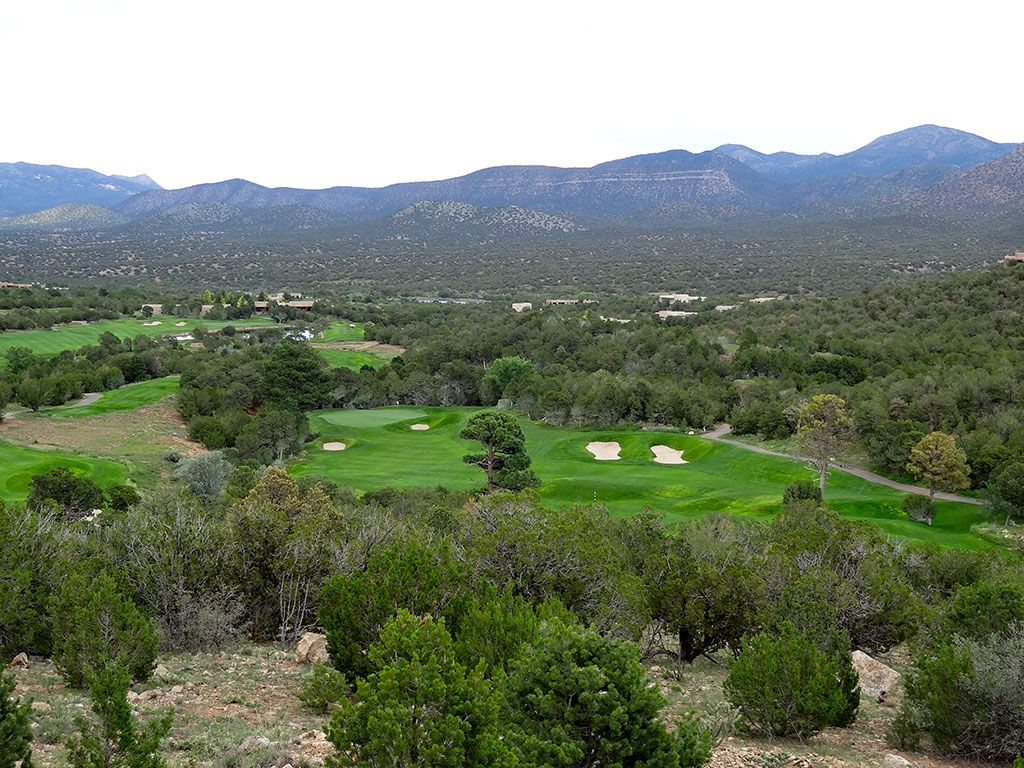 One of Albuquerque's newest and most revered courses is the Gary Panks designed Twin Warriors Golf Club on the Santa Ana Pueblo Indian Reservation located less than 30 minutes north of downtown off I-25. New Mexico's first all inclusive golf destination includes the spectacular 350-room Hyatt Resort and Spa that offers an unparalleled dining and relaxation experience for the area.

Twin Warriors' signature hole comes early in the round at the 197 yard 4th hole. With a series of waterfalls on the left and a large pond in front, hitting this green can be as big of a battle with nerves as it is skill. 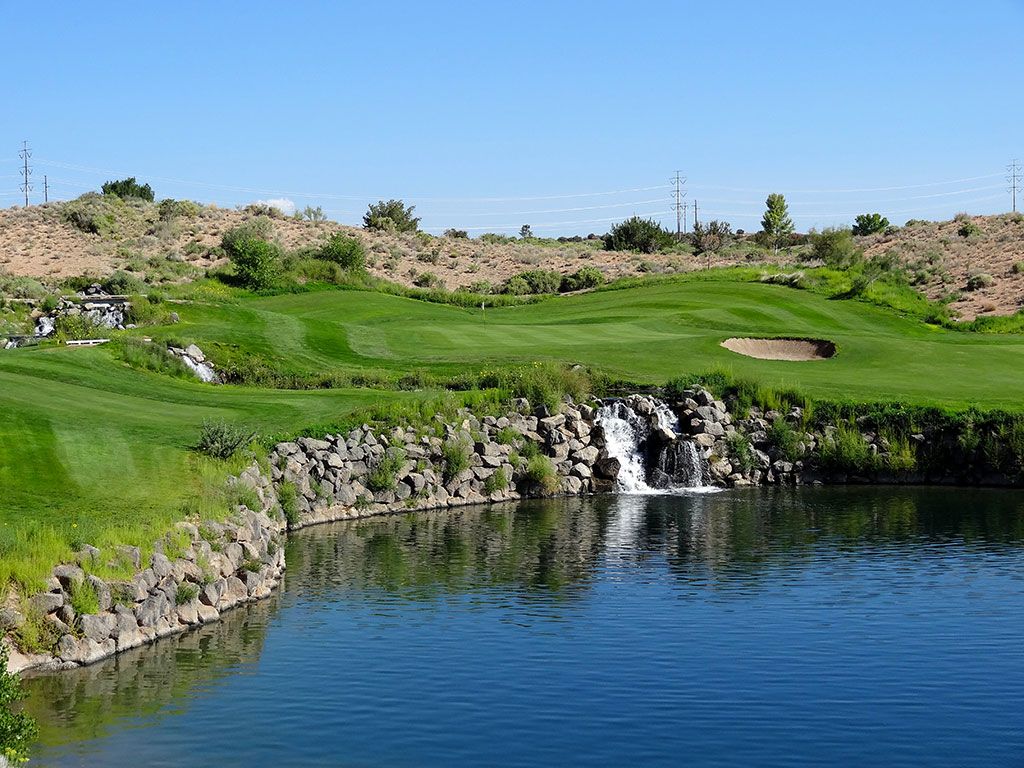 With tees ranging from 7700 yards to 5100 yards, players of all skill levels can find a course setup that suits them. Course conditions are consistently excellent at Twin Warriors which you'd expect with green fees ranging from $79 - $119 during peak season.

All in all, golf in Albuquerque was better than I was expecting. With 300 days of sunshine a year and easy airport access, New Mexico combines its laid back charm, southwestern food, and great golf to represent an excellent location for your next golf trip.

The second of the two courses at Moonah Links to be built, the Open course is all about tournament golf. The hole designs are done in a way to create more challenge than creativity from an architectural standpoint which is great for a tournament but not as fun for casual golf. Known as one of the longest and most difficult courses Down Under, the Open course is an excellent test from start to finish. Interestingly the routing was a bit clunky where at one intersection of the cart paths I took…