I have divided the group into two teams and we will be have a little Ryder Cup style competition that I'm naming the Puffin Cup after the Bandon Dunes logo of a Tufted Puffin bird. There will be 18 points up for grabs, so the team that reaches 9 1/2 first will lay claim to the coveted title of Puffin Cup Champions. Team Bandon will consist of the Highland 9th ward plus Dewight while Team Pacific will be everyone else. Each day you will be paired with a partner from your team and you will play together for the day. Over the course of the trip you will be paired up with three different teammates and will play against every person on the other team (except for one exception because I couldn't get the matrix to work getting everyone against each other). We have a variety of formats we will be playing which I think will be a ton of fun. Here are the roommate assignments as well as the schedule of events:

Sunday November 20th: Leave the Horseshoe Inn at 6:30 AM and drive to 2555 Northwest Shevlin Park Road in Bend, OR to attend 9:00 AM sacrament meeting. Grab something to eat before taking off for for Bandon Dunes where we will check things out and roll some putts on Punchbowl. At dark, drive up to Coos Bay and get something to eat before checking into the luxurious Motel 6 - 1445 N. Bayshore Drive, Coos Bay, OR.

1st Competition - Team Modified Stableford - 3 points at stake - The Modified Stableford format is perfect for a risk/reward course like Pacific Dunes with all of its 1/2 par holes, tight chipping areas, and ball-eating gorse. The point system punishes players extra for reaching the max of double bogey while offering a greater reward than standard for going under par. 5 points are rewarded for an eagle, 2 for a birdie, 0 for a par, -1 for a bogey, and -3 for a double bogey or worse. Teammates points are combined on each hole and the team with the most points at the end of the match earns a point for their team. Despite the lack of yardage, I think that Pacific Dunes is the most difficult course on the property so there should be some entertaining point combinations that occur.

7:40 AM - Pacific Dunes - Satterfield/Dewight vs Shipp/Almond (Everyone plays the Black tees)

7:50 AM - Pacific Dunes - Wilde/George vs Henderson/Boyd (Wilde and Henderson play the Blacks; George and Boyd play the Green tees)

8:00 AM - Pacific Dunes - McMinn/Fenstermaker vs Lloyd/Dixon (Everyone plays the Green tees)

12:00 PM - Lunch at Pacific Grill (or eat at the Old Macdonald turnhouse and get chili and hot dog) 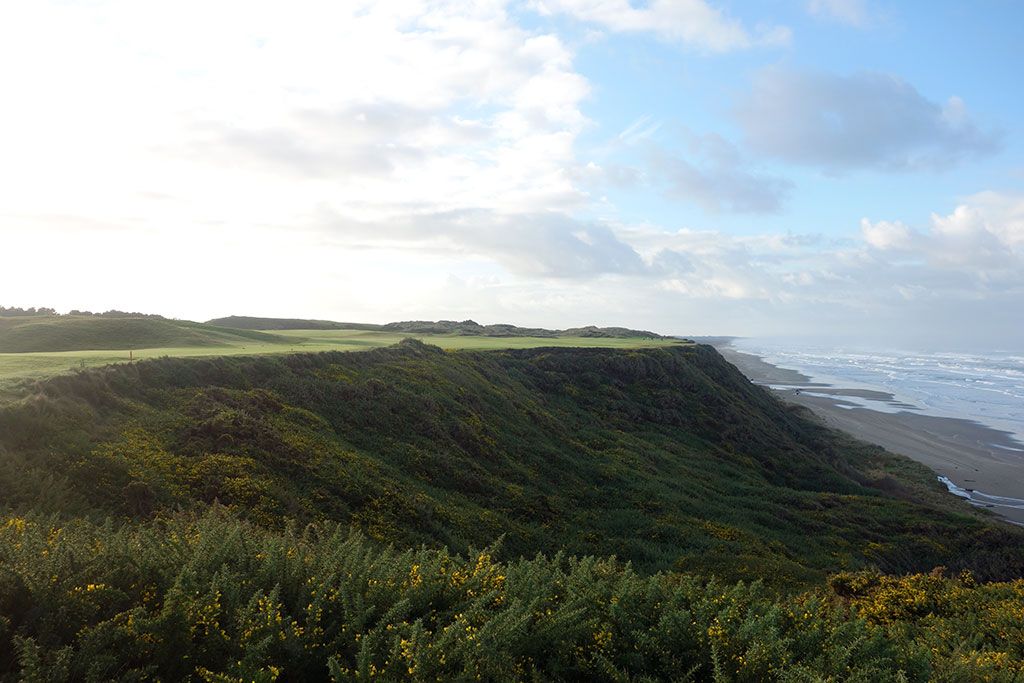 2nd Competition - Four Ball - This is a straight up 2 vs 2 best ball format where the best individual score from each team is pitted against each other in a match play scoring format. Each hole is worth one point; ties result in a halve. Despite the lack of yardage, I think that Pacific Dunes is the most difficult course on the property. Old Macdonald is the longest course on the property, but it also has the widest fairways and the biggest greens, so there isn't a lot of trouble to get into but more subtleties in the putting surface and speed slots in the fairways to concur to walk away with the win. My prediction? No one walks off Old Macdonald without at least one 3-putt and someone will take a 4-putt unless it is conceded before the humiliation unfolds.

6:30 PM - Eat dinner at The Gallery - I'll be getting the New York Strip or Ribeye

8:00 PM - Chill in your room, in the whirlpool, or at McKee's Pub with your Sprite on the rocks while watching Monday Night Football 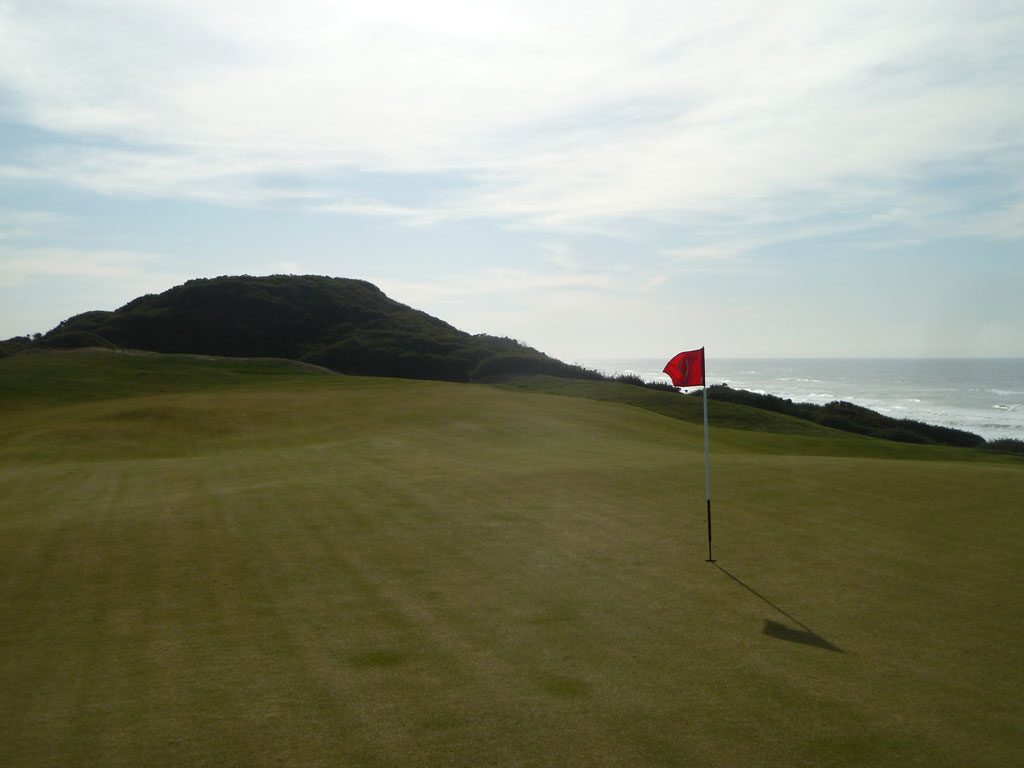 3rd Competition - Sin City - 3 points at stake - This is a twist I'm putting on the popular Las Vegas format we play in the golf league and it will debut for the morning round at Bandon Trials. Instead of a cumulative score at the end, points are earned by winning individual holes rather than worrying about your total score. If Team A scores a 7 and a 4 on the first hole and Team B scores a 5 and a 6, Team A's 47 beats Team B's 56 and wins the hole. If both teams score the exact same, such as the common 45 score, then the hole is halved just like in regular match play. Trails is the most unique course at the resort in terms of terrain and surroundings with tree lined fairways, heavily undulated greens, and the most controversial hole on the property; the short par four 14th. There are enough subtleties at Bandon Trails you'll miss the first time around that it is a good best ball course, but with the Vegas/Sin City scoring format it is a little more than best ball; essentially, the lead number is worth 90% of the team's score and the second number represents 10% and it never ceases to amaze me how often that second number can be a factor in a match.

7:40 AM - Bandon Trails - Satterfield/Wilde vs Almond/Dixon (Everyone plays the Black tees) 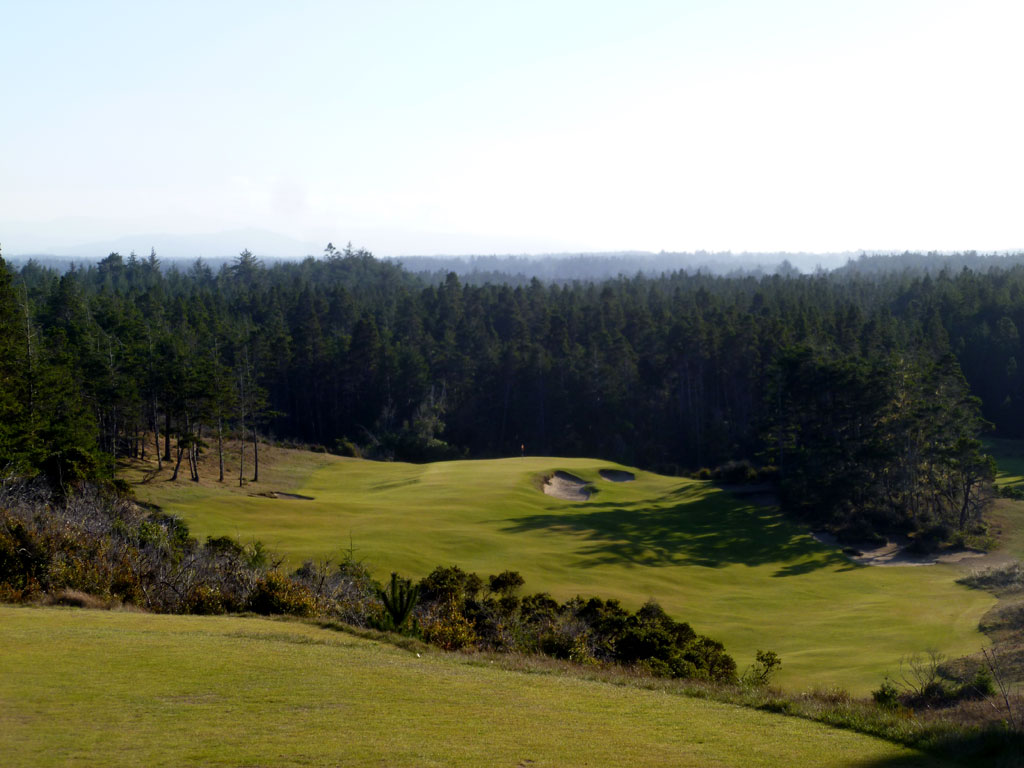 4th Competition - Team Chicago Stableford - 3 points at stake - The course with the most exposure to the ocean wraps day two of the competition. The fairways are wider than at Pacific Dunes which is why I scheduled this course (and Old Macdonald) in the afternoon in the event the winds pick up. 1/2 pars don't really exist at Bandon Dunes as it features more traditional yardage lengths for their respective par value. With generous fairways to play from, the Chicago Stableford is a good format here as there will be greater opportunities to get some holes under par. 8 points are rewarded for an eagle, 4 for a birdie, 2 for a par, 1 for a bogey, and 0 for a double bogey or worse. Each player's points count towards the total, so if one team takes a par and a bogey, their total points for the hole = 3. The team with the most points at the end of the match wins the point. 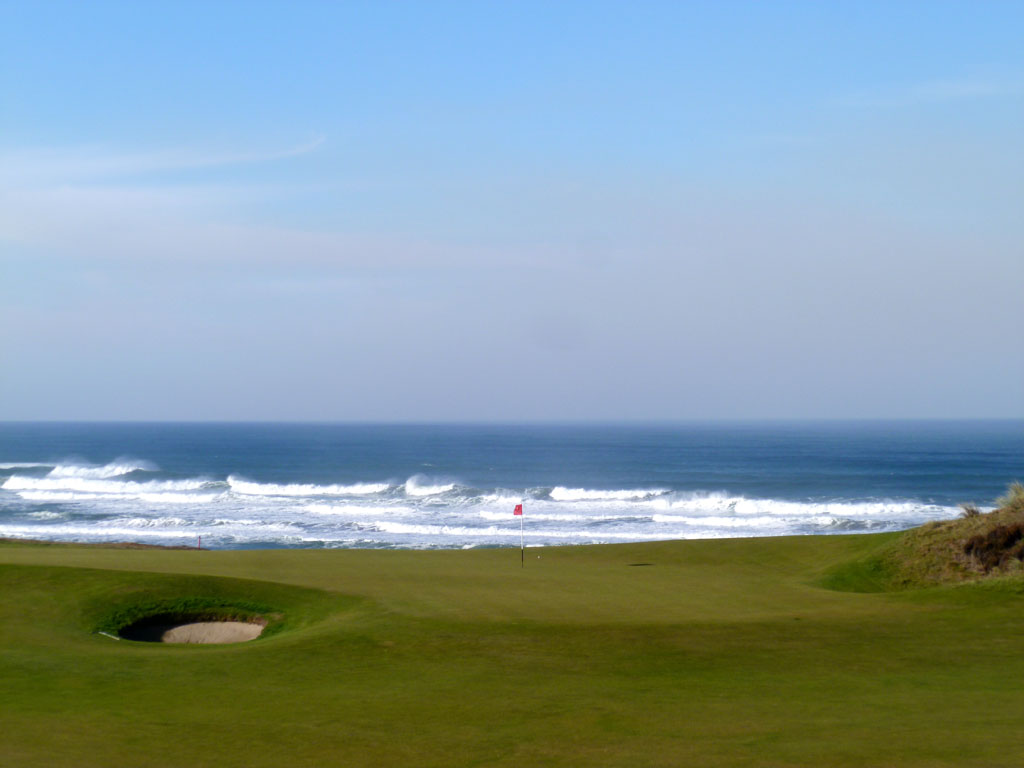 5th Competition - Double Team - 6 points at stake - On a course where the longest hole is 150 yards and handicaps need not be a factor, I'm introducing a new format called Double Team which is a modification of a format Dewight suggested to me. In this format, you will be taking on each of your opponents in a singles match play match as well as a team skins match. Each singles match is worth 1/2 point and the team skins match is worth a full point. Unlike the other formats, this one can not finish with a tie/halve at the end of the match. If a match is tied after 13 holes (the total number of holes on Bandon Preserve), then the team with the lowest best ball score secures the 1/2 point available for the singles match that is tied. If the team best ball score is a tie, the team with the most birdies wins the tied individual match. If the team birdie count is a tie, the team that won the skins game secures the 1/2 point. For the Skins game, holes 1-9 are worth one skin each and holes 10-13 are worth two skins each. In the event of a tie on a hole, the skin is carried onto the next hole. So if the first three holes are ties and then the fourth hole is won, the winning team would claim four skins and then hole #5 would be worth one point. If after the 13th hole one team has a lead in the skins count then they win the match point, even if there are unclaimed skins. If the skin count is tied after 13 holes, then all four players return to the 13th tee and the player that hits their tee shot closest to the hole wins the match point for their team.

8:00 AM - Bandon Preserve - Dewight/George vs Shipp/Dixon (Everyone plays the back tees)

8:15 AM - Bandon Preserve - Wilde/McMinn vs Almond/Boyd (Everyone plays the back tees)

8:30 AM - Bandon Preserve - Satterfield/Fenstermaker vs Henderson/Lloyd (Everyone plays the back tees)

10:00 AM - Tally up the final points, watch the winners celebrate while the losers talk about what could have been, load up in the cars and drive home 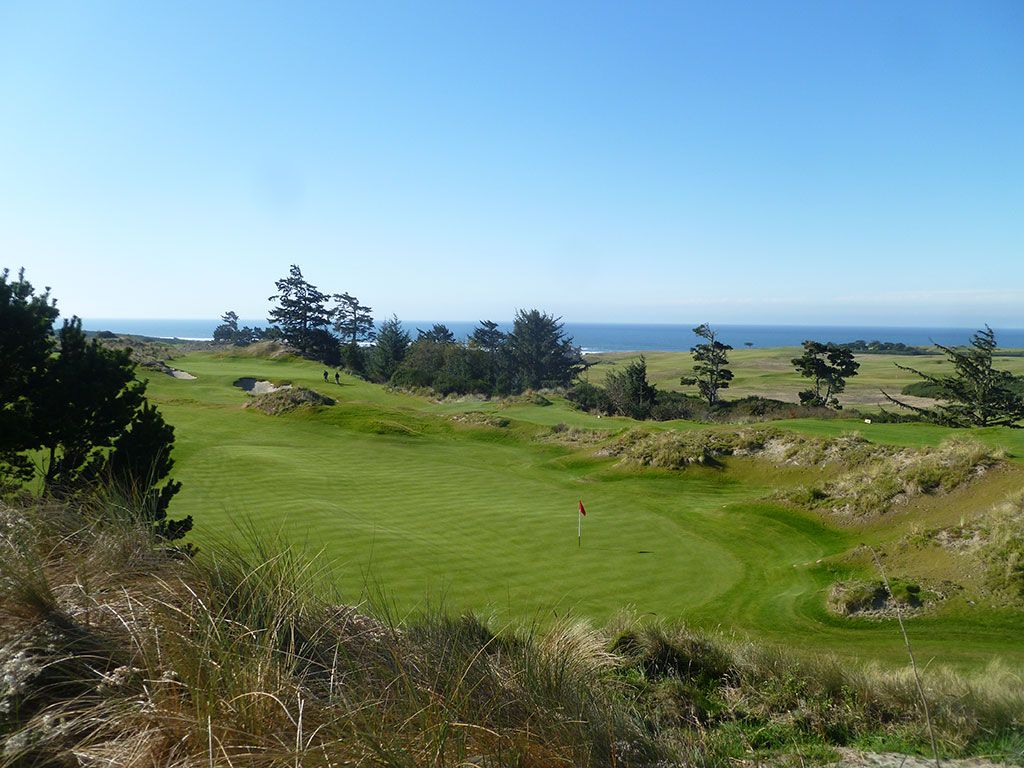 The views and fun at Bandon Preserve have few rivals in the country, especially for a par 3 course

The assignments on what tees to play is to help balance of the skill level of each match as are the handicaps awarded on certain holes. I'm relying on what players have scored in the golf league over the years combined with the slope/rating of each course's tees and individual hole handicap ratings. I may choose to make some adjustments, but in the end this is my best shot at trying to make things as balanced as possible in each match so that everyone can go out and be competitive. Ultimately however, how well or poorly you play each round will be the biggest factor in your success or demise. Also, the "max me" rule will be in effect for this trip, which RJay proudly displays on his license plate, so the worst score you can take is a double bogey.

This is going to be a ton of fun! I've spent a stupid number of hours compiling teams, arranging matchups, factoring handicaps, considering game formats, etc. in an effort to have everyone enjoy their friends while making new ones. I started with aspirations of having everyone play at least one round with everyone else that is going on the trip, but once I split the group up into teams it became a near impossible proposition. Everyone coming on this trip was hand picked and is a great guy to spend time with on the golf course, in the car, over a meal, or while sharing a room so plan on having a great time with whoever you are with at any given time. I'm really excited for this outing and think the formats and team aspect of the trip is going to be a blast to enjoy while playing some of the finest courses you'll ever step foot on as you enjoy golf as it was meant to be.

Let’s get something out of the way; Eastward Ho! is one of the best and most underrated golf courses in the country. The spectacular setting on Cape Cod in southern Massachusetts enjoys extensive coastline, engaging terrain, and top shelf hole designs to create a course with few rivals. The property is much hillier than one might expect, especially so close to the ocean, and it will test every bit of your shot making skills, mental aptitude, and ability to adapt. While the overall length is…