If you think you have played a links course . . . you're wrong. Well, that is at least what I had to inform a dozen golfers getting ready to embark on a buddies trip to Bandon Dunes for the first time. The term "links" is used loosely by golfers, particularly in America, that don't really know or appreciate what truly makes a course a links. If you think the term links refers to a course where the routing is linked together like a chain that hooks one green to the next tee box nearly seamlessly . . . you're wrong. The term links comes from the Scottish term hlinc which means a hill, rise, or ridge and additionally refers to the rising transitional area between the coastal beach and the more fertile inland farm land. Links land was of little value to farmers hundreds of years ago since the ground was characterized by large wind-swept dunes and sandy soil that lacked the moisture or nutrients to allow for arable farming, which I'm sure RJay with his background can inform you is farming that requires plowing. This sandy soil instead houses marram, bent, and fescue grasses which you may assume are salt tolerant, but if you do . . . you're wrong. These grasses are not salt tolerant, but they are one of the few plants that can thrive in the windy, sandy conditions found near the ocean. These grasses are the vital plant that stabilizes the sandy dunes from blowing away with erosion. 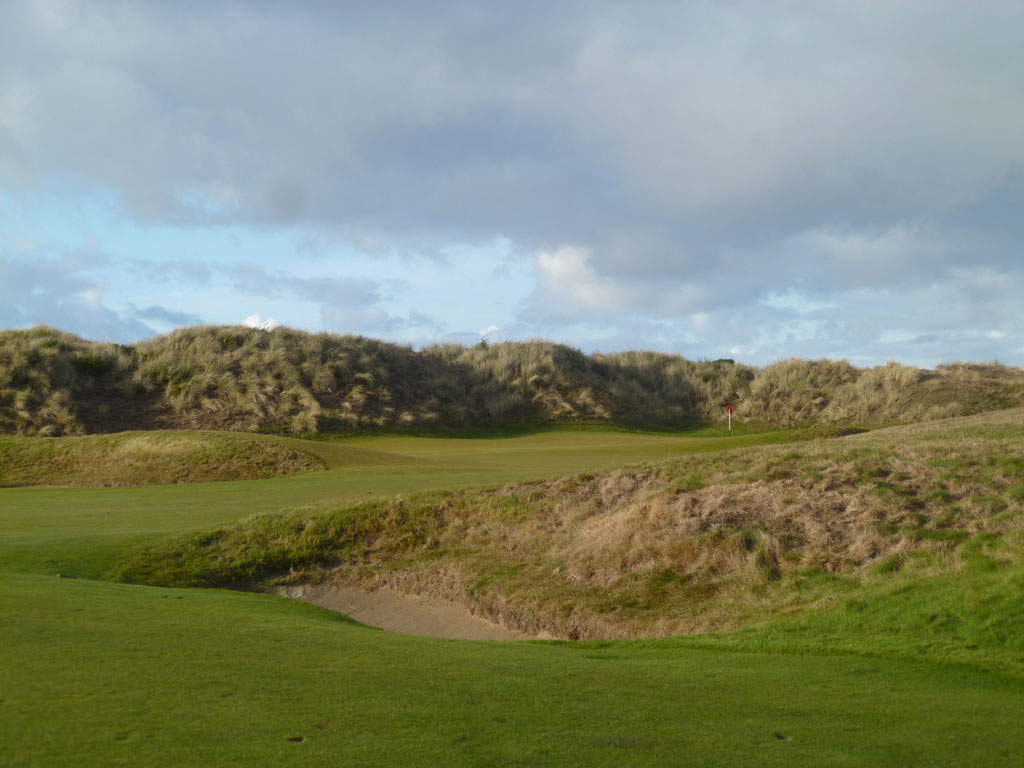 Though the ground was unusable for farming, the sandy soil and grass that grew from them became the ideal place for animals to graze. These animals, generally sheep, would burrow and scrape their way into the leeward side of the dunes to gain protection from the wind. These burrowed spots became natural bunkers when golf started being played on the land. If you call these areas "sand traps" . . . you're wrong. Sand was never originally intended to be a "trap," these natural burrowed areas were simply bunkers of protection for animals that were commonly found along seaside links land. When golf began being played on links land, the low ground at the base of the leeward side of a sand dune became a natural location to place a green where the players would be protected from the wind while putting. Since these bunkers were found next to greens, the concept developed over time to place "unnatural" bunkers next to greens at inland courses. 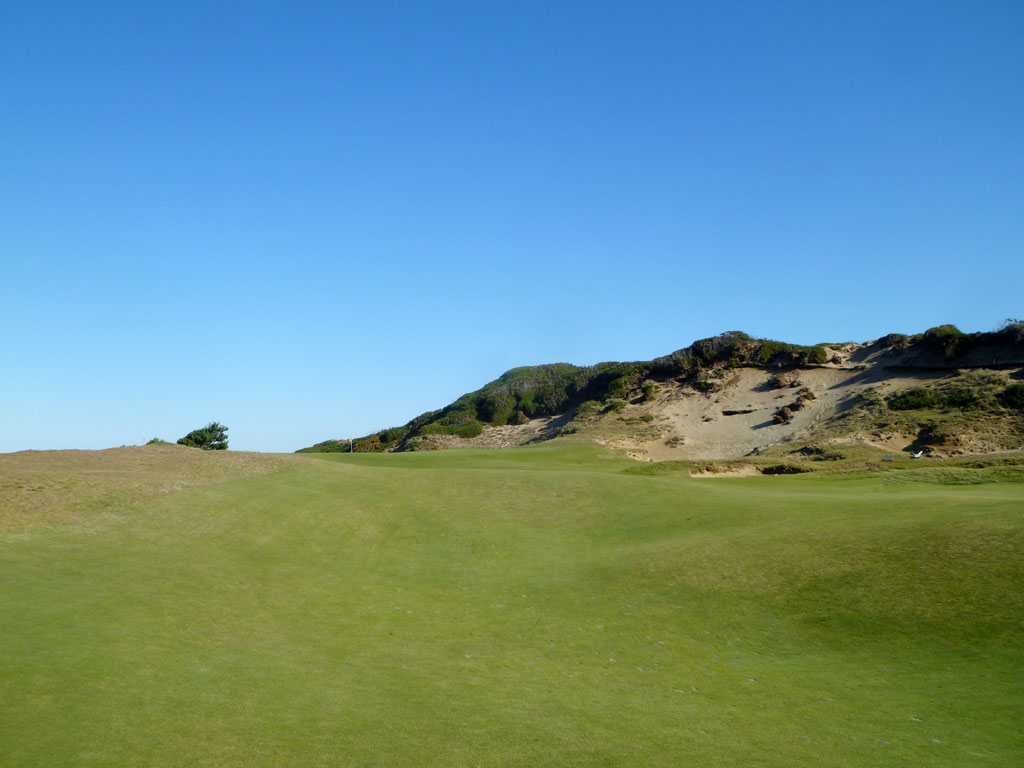 George Peper is pretty much the authority on links golf. Along with Malcolm Campbell he co-authored a book entitled "True Links" which discusses at length the attributes that are required in order to be considered a links courses along with the list of every links course in the world. If you think there are numerous links options in America . . . you're wrong. In fact, Peper identifies just four links courses in America and each of you will be able to experience three of them. Bandon Dunes, Pacific Dunes, and Old Macdonald each made the distinguished list along with the 9-hole Highland Links course found on Cape Cod. 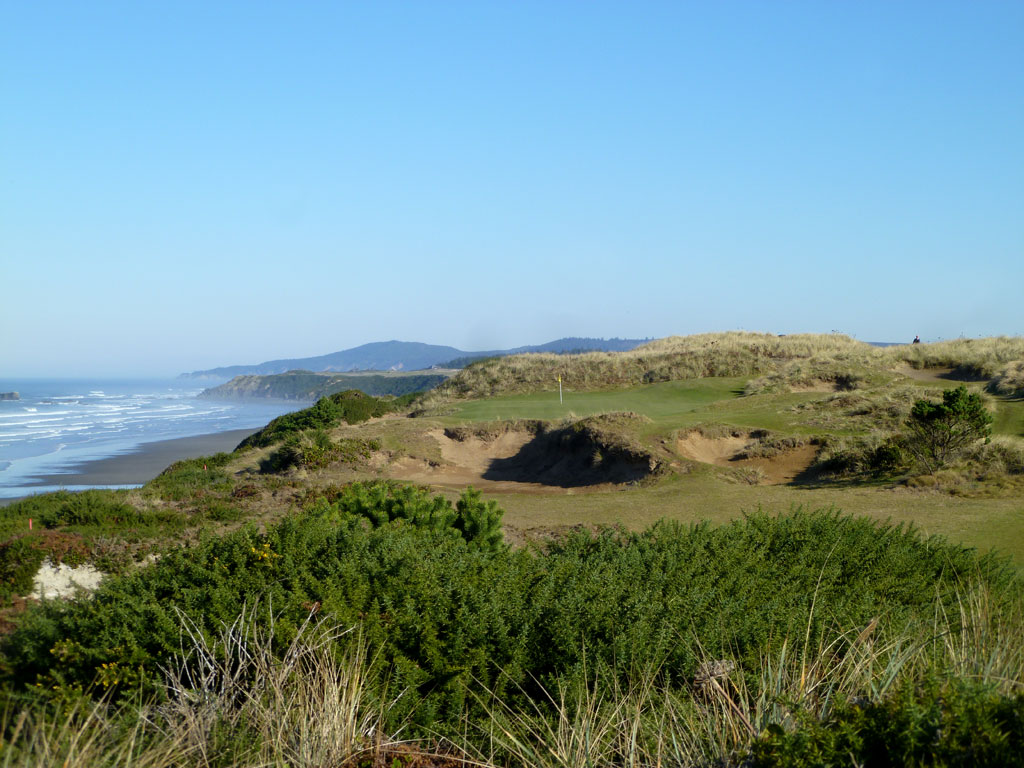 So what defines a true links course? A variety of conditions apply, but here is a quick list: The course needs to be seaside with sandy soil that drains easily (sand drains so well because the granules are porous thus allowing for quick drainage). The sandy soil should exist due to the receding sea or by deposit of a river estuary. The playing turf should be fescue with its thin, wiry blades and deep roots that are natural to the sandy based soil. Natural wind-swept dunes are found on the property and stand as a product of Mother Nature's work near the sea. The course should sit naturally on the terrain so that the peculiar bumps, slopes, and undulations in the ground for the most part are untouched. In the case of greens, they are often shaped to accommodate proper drainage while many of the natural contours remain untouched. Fescue, gorse (as you'll experience at Bandon), and other gnarly seaside plants are often found in and around the property and act as natural erosion protection to the terrain. Some will insist that trees should not be found on the property although Peper and Campbell use some liberties in that category but certainly eliminate courses surround by numerous trees. Due to the windy locations of true links courses, the bunkers are deep to prevent the sand from blowing away. Early links courses were never watered and golf was mainly played in the winter when the grass was "cut" short from the sheep grazing. Summer months with little rain left courses brown and nearly dead, though fescue is hardy and bounces back well from those conditions. With that small definition you can see why finding a true links experience is so difficult. In fact, over 85% of the links courses in the world are found in Britain and Ireland because of the geological rarities they enjoy. 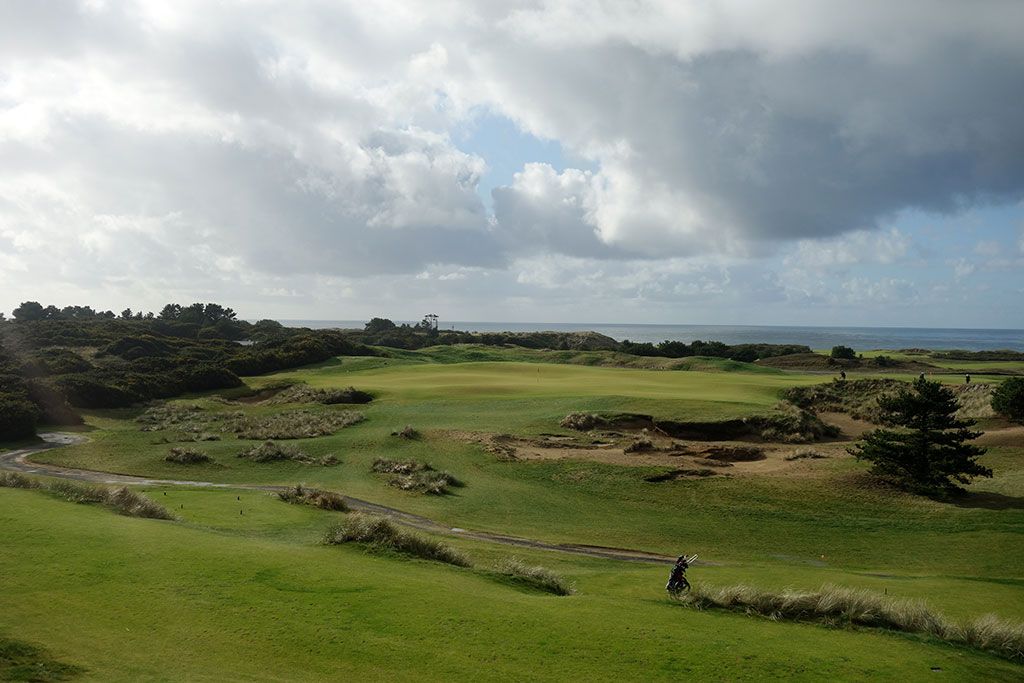 While many Americans have not experienced "true links golf" as defined my Mr. Peper, many of you likely have come extremely close. The top "almost links" experience is a course that everyone saw during the 2015 U.S. Open; Chambers Bay. The only reason Chambers didn't make Peper's list is because the course is located on the Puget Sound rather than the actual ocean that is 100 miles away. Other than the Puget Sound technically not being the ocean, Chambers Bay is a links course in every sense of the word. Fescue fairways, fescue greens, tons of undulations, tight conditions (not the plush grass you are used to playing), sandy based soil, huge bunkers, etc. It is a different golf experience. Some other great "almost links" courses include Arcadia Bluffs in Michigan, Whistling Straits in Wisconsin, Kiawah Island's Ocean course in South Carolina, and the famous Pebble Beach and Spanish Bay courses in California. There are also excellent "inland links" offerings led by Sand Hills in Nebraska and accompanied by The Prairie Club (Dunes course) and Dismal River courses in the Cornhusker state. Northeast Colorado features Ballyneal which features choppy dunes and and excellent firm-and-fast links experience. More manufactured links courses include a pair of David McLay Kidd designs with Tetherow and Huntsman Springs. 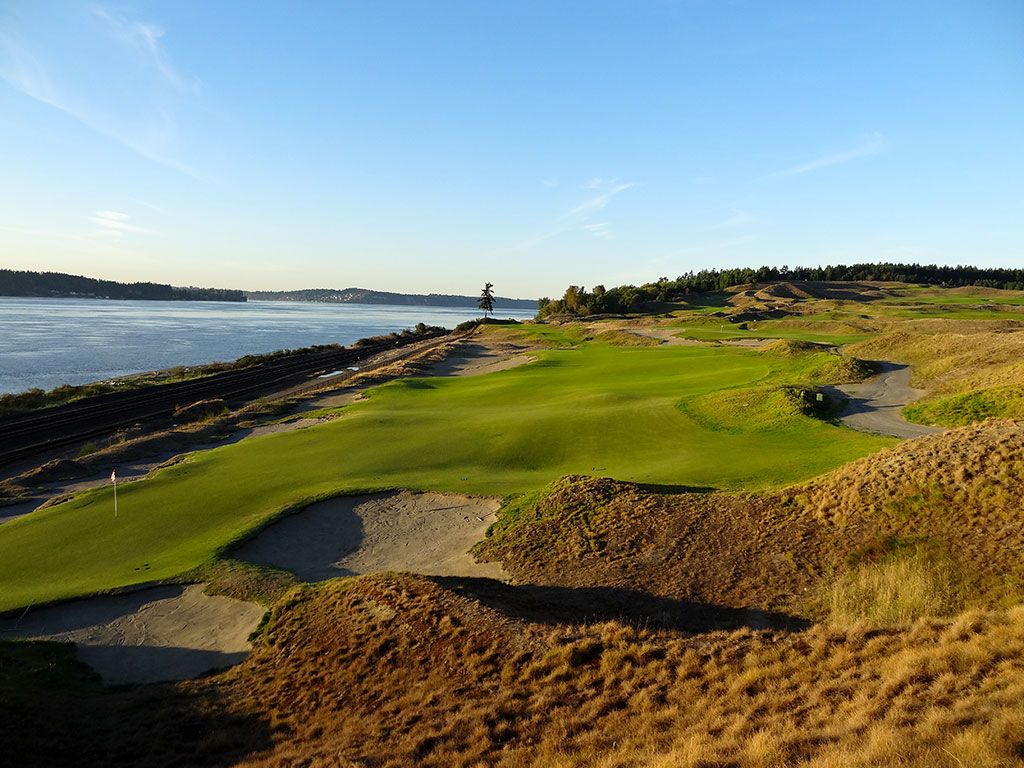 My final comment about links is concerning one of its best qualities . . . options. Parkland golf too often demands golfers to play a course a specific way. It is an uninspired and unimaginative brand of golf. Parkland courses are often used on the PGA Tour to test players ability to execute specific shots in specific situations, but for general playability and fun it lacks the "chops" to offer a great experience that can be enjoyed over and over again without boredom. You've all played Highland enough to know that parkland golf is often "mindless" golf. Take little to no thought on what club to grab from your bag or what strategy to employ, just swing away. If you execute a poor shot that finishes in a pond or into the trees you are almost certainly eliminated from the hole in a match. However with links golf, every shot demands thought and you almost always have multiple options when recovering from a poor shot. Employing your imaginzation by utilizing contours in the fairway or on the green to work the ball nearer to the hole bring great satisfaction that can't be found in other styles of golf courses. When considering shots on links courses, perhaps Bobby Jones said it best,

"There is always some little favor of wind or terrain waiting for the man who has judgment enough to use it, and there is a little feeling of triumph, a thrill that comes with the knowledge of having done a thing well, when a puzzling hole has been conquered by something other than mechanical skill."

If you think you're going to have a blast playing true links courses . . . you're right! 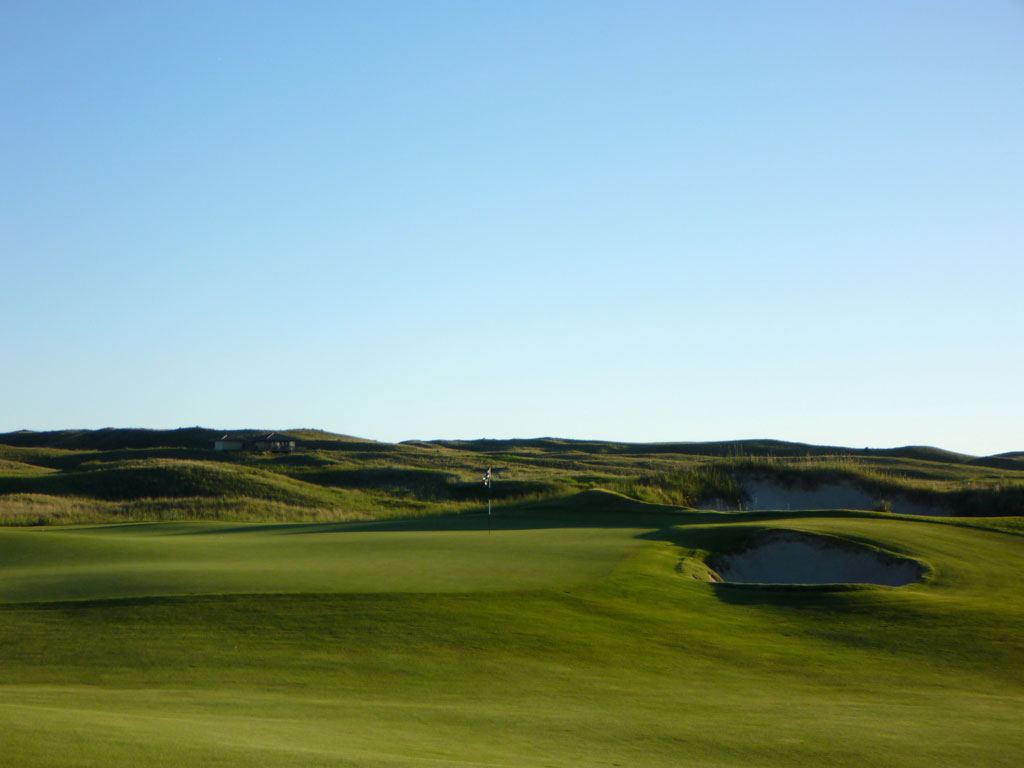 "National" is one of the funnest and most charming courses ever built. It features everything a golfer could hope for, namely, variety, wonderful course architecture, history, and a stunning location. The goal of NGLA was to design the finest course outside of the British Isles and to incorporate the best hole designs from some of the finest clubs from the other side of the pond. Courses that have names for every hole usually are just being redundant, but at National Golf Links of America it pay…