What to Expect:  Few courses have as rich of a history as the Tillinghast 36 hole offering at Winged Foot in New York. The storied East and West courses combined have hosted the U.S. Open five times (1929, 1959, 1974, 1984 and 2006), U.S. Amateur twice, Women’s U.S. Open twice, Senior U.S. Open once, and a PGA Championship (1997). The 2006 U.S. Open went down in history for two major reasons; it was the first time Tiger Woods had missed the cut at a major in his professional career and it was Phil Mickelson's worst eternally haunting 72nd hole of his career. Winged Foot is located on a mostly flat piece of property with tons of trees lining every hole. To add character and challenge to the course, Tillinghast raised virtually every green site and surrounded the putting surfaces with bunkers. These green sites are the brilliance behind the Winged Foot design especially since the fairways leave little distinguishment. The collection of par threes on the West course paired with the 13th from the East course are Winged Foot’s greatest pride; particularly the 10th hole that Tillinghast claimed was the best par three he ever built. In terms of stature and amenities, Winged Foot is tough to trump given the two story locker room and maybe the most attractive clubhouse in the country with an exterior that was built from the stone and rock found on the property. In conclusion, you won’t find a more dedicated group of members to the game of golf than those at Winged Foot. Players walk the course with a caddy carrying their clubs and the historic roots of the game are celebrated. The tree lined fairways and slight doglegs that appear on so many holes make the course a bit unmemorable off the tee but the green complexes are as good as anything you’ll ever encounter.

Signature Hole:  3rd Hole – 148 Yard Par 3 – The East’s 3rd hole is a short and attractive one-shotter with natural boulder formations found in front of the tee box and along the right side of the hole. The contrast between the light green colored putting surface and the dark grass and dark foliage in the background is an appealing sight that is further enhanced by the white bunkers found on each side of the putting surface. The front edge of the green slopes downhill and creates a false front and adds to the appeal of this fantastic sub-150 yard hole. 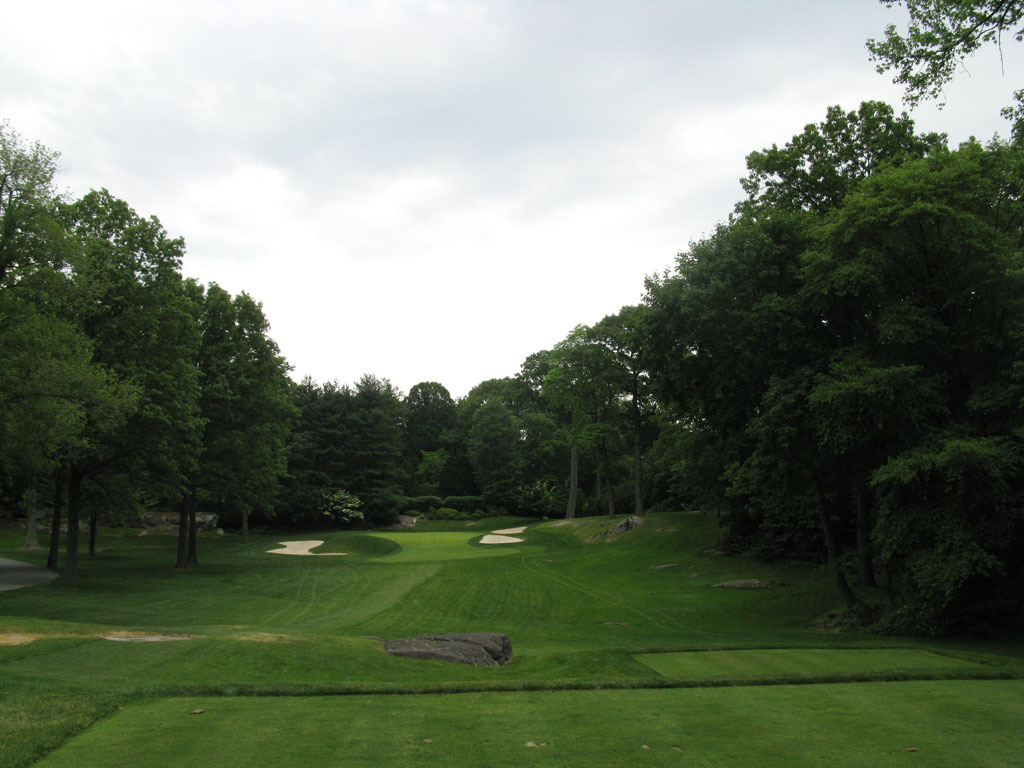 Best Par 3:  13th Hole – 146 Yards – Chris is the best caddy the Gurus have ever had and we were privileged to have him toting our bags at Winged Foot. Chris expressed the opinion that this hole was so good that it needed to somehow to incorporated into the West course when hosting major tournaments and we couldn’t agree more. This fantastic par three is not only attractive with the four fingers of the bunker climbing up the bank of the pushed up green, but it features a challenging putting surface to hit and is a hard sloping green. Very few courses features two sub-150 par threes in the caliber of Winged Foot East’s offering. 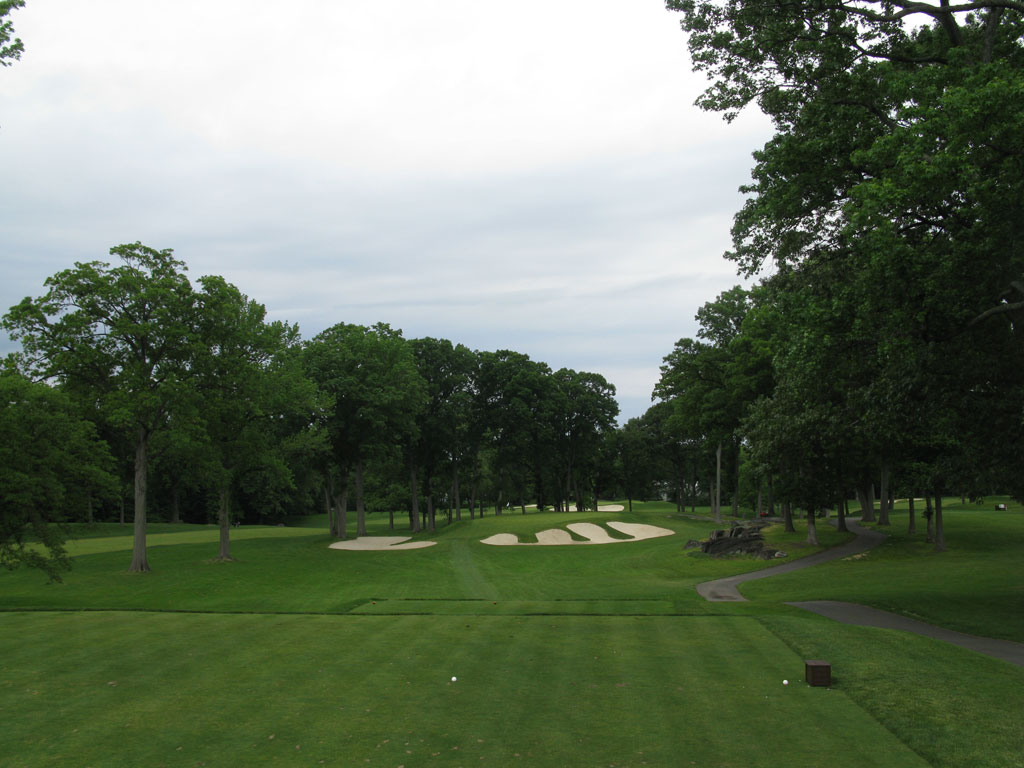 Best Par 4:  15th Hole – 336 Yards – The East course is less demanding and features a bit more character than the West course and the 15th hole is a perfect example of why. This short par four features a water hazard that crosses the fairway. It is at a distance that can be carried off the tee with a solid tee shot but the fairway beyond the hazard slopes back towards the water so you better be sure you give your tee shot plenty of juice when going for it. Carrying the water will leave an uphill chip at the green while laying back off the tee will leave an approach shot to a plateau green where much of the putting surface isn’t visible from the fairway. It is a rare risk/reward opportunity at Winged Foot and will be an enjoyable break from the norm. 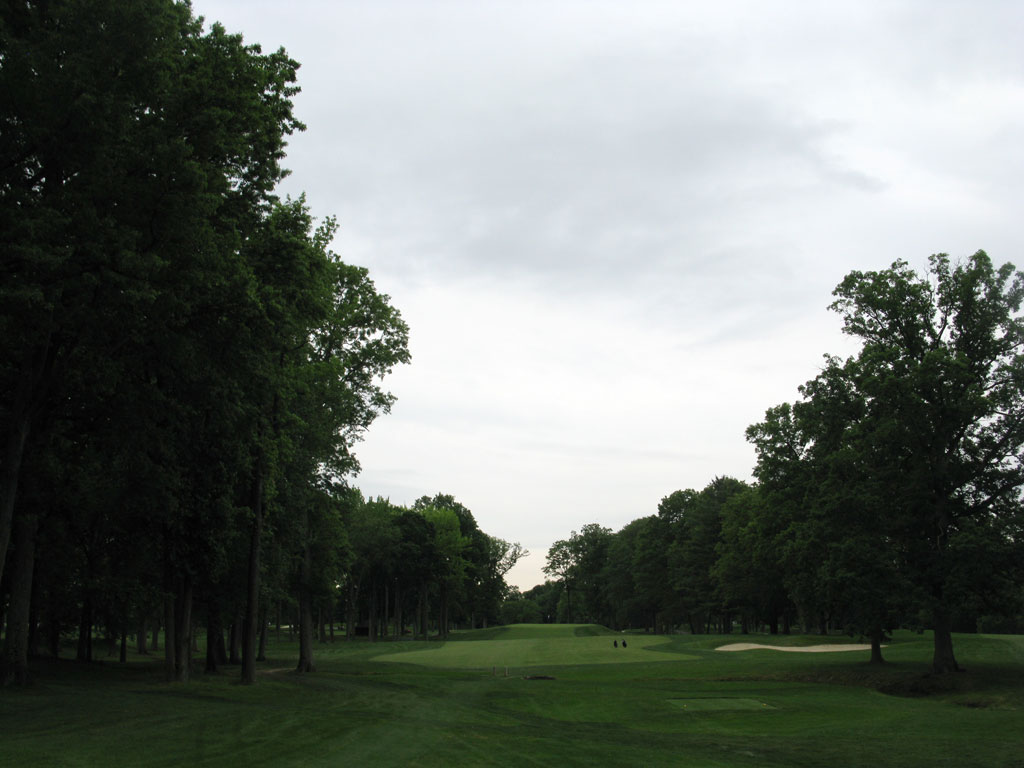 Best Par 5:  4th Hole – 578 Yards – The 4th hole is a memorable three-shotter that wraps around to the right along a large pond. The fairway gently climbs uphill before falling back downhill and towards the green. When laying up, it is advisable to aim for the far left side of the fairway in order to increase of the chances of getting a level lie. Not only it is the best par five on the East course, it is probably the best par five on the entire property. 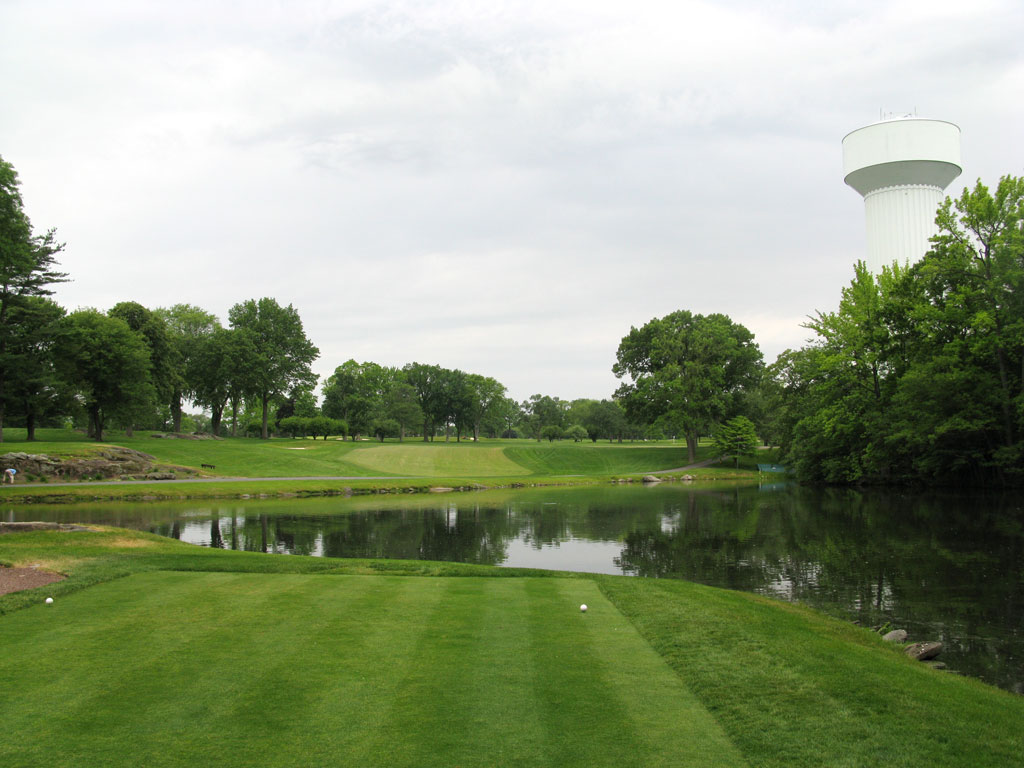 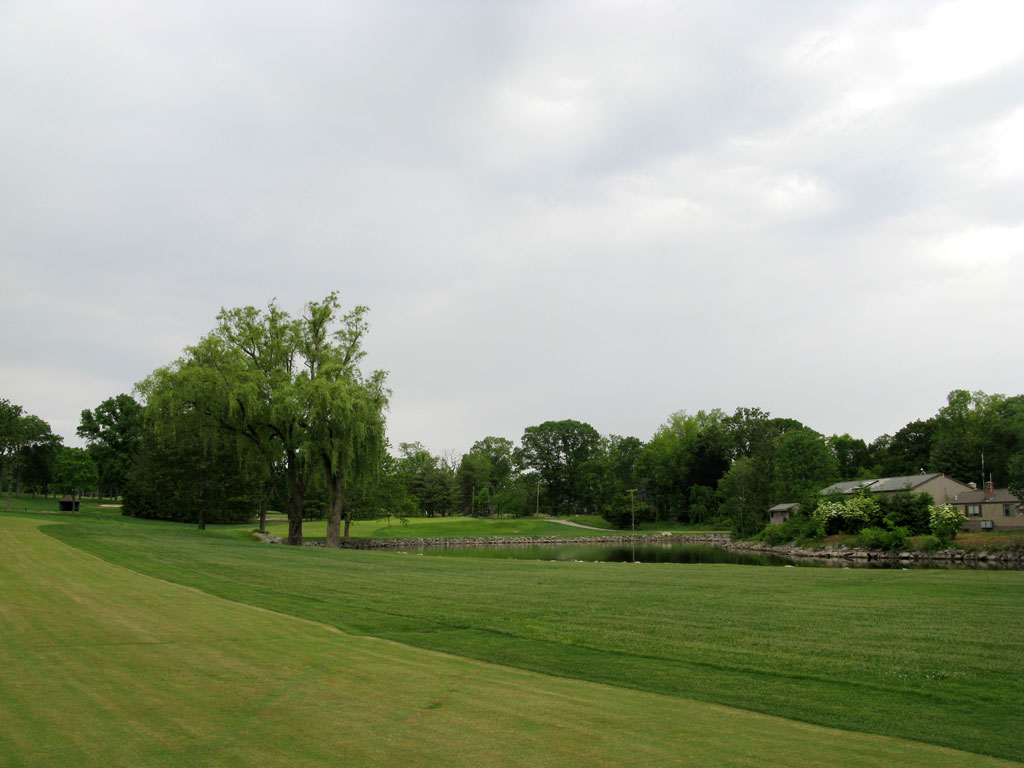 Birdie Time:  8th Hole – 451 Yard Par 5 – That is not a typo; a 451 yard par five at Winged Foot. After taking our licks on the West course, we were thrilled to be presented with such a great birdie opportunity. The hole doglegs sharply left and prevents many players from hitting driver off the tee in fear of hitting their ball through the fairway. Even with laying up off the tee, this is a great chance to reach a par five in two with little trouble presented around the green other than one bunker on the right side. This is the easiest birdie on the property; take advantage of it! 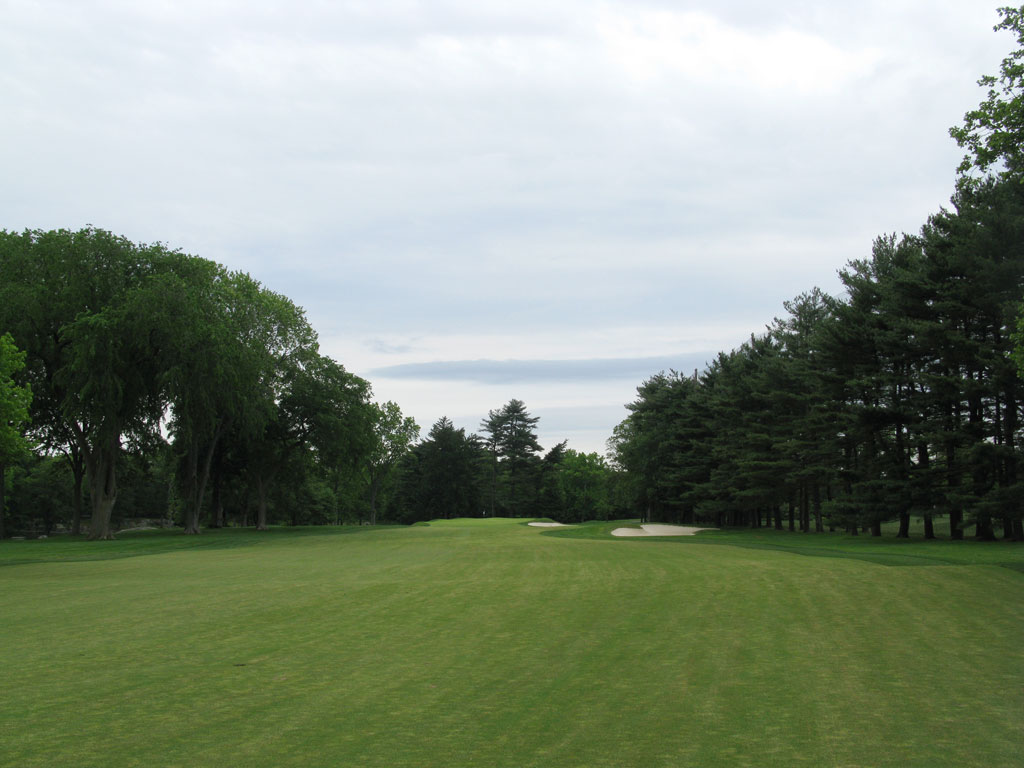 Bogey Beware:  16th Hole – 448 Yard Par 4 – Just three yards shorter than the par five 8th hole, the par four 16th hole proves to be a challenge to get down in four strokes. The fairway takes a late dogleg turn right and climbs uphill to the green. Several bunkers are found on each side of the nearly blind putting surface that slopes left to right. Due to the terrain, the hole actually plays longer than the par five 8th hole and proves to be the most difficult test on the East course. 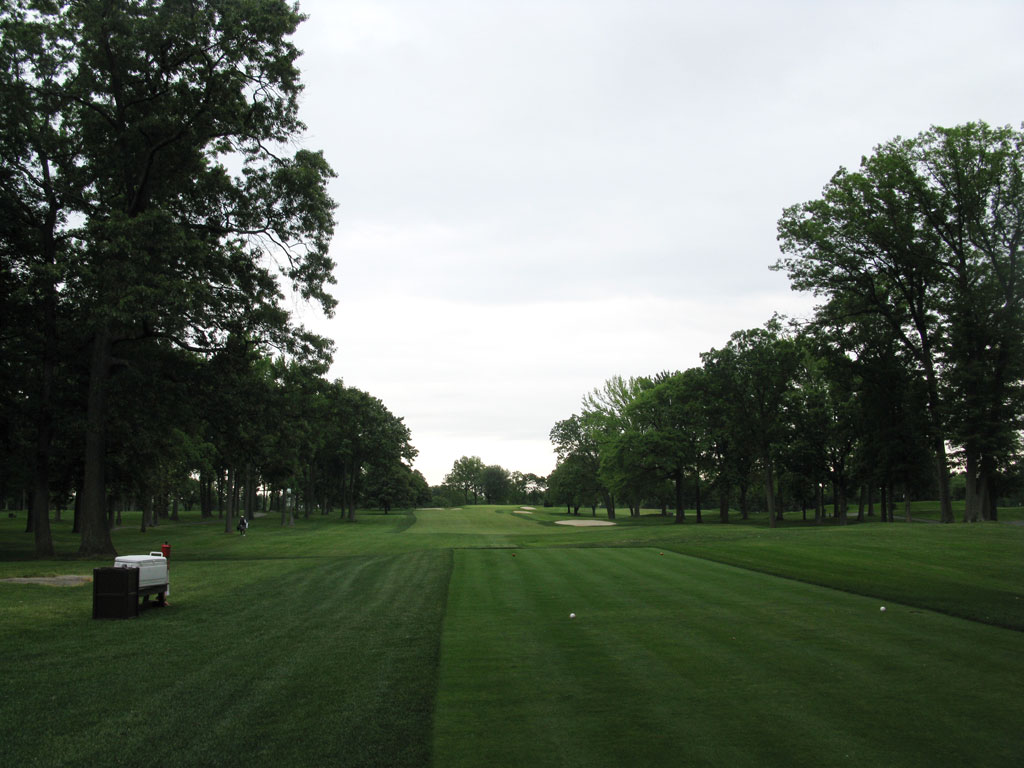 Manito Country Club is a historic course located in the southern portion of Spokane surround by a mature, revered neighborhood. It is hard to believe given the length of today’s tour courses, but Manito hosted the 1944 PGA Championship though the course tips out at 6470 yards today. Manito is located on mostly flat ground with towering pine trees lining the relatively tight fairways. The conditioning is admirable, as you would expect from a country club, and water comes into play on a handf…